Calvin can be funny! 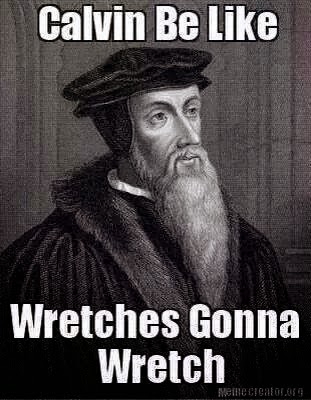 But admit it, you were expecting Calvin and Hobbes.  Sorry about that.

HT: Regina!
Posted by The Ironic Catholic at 8:00 AM No comments: 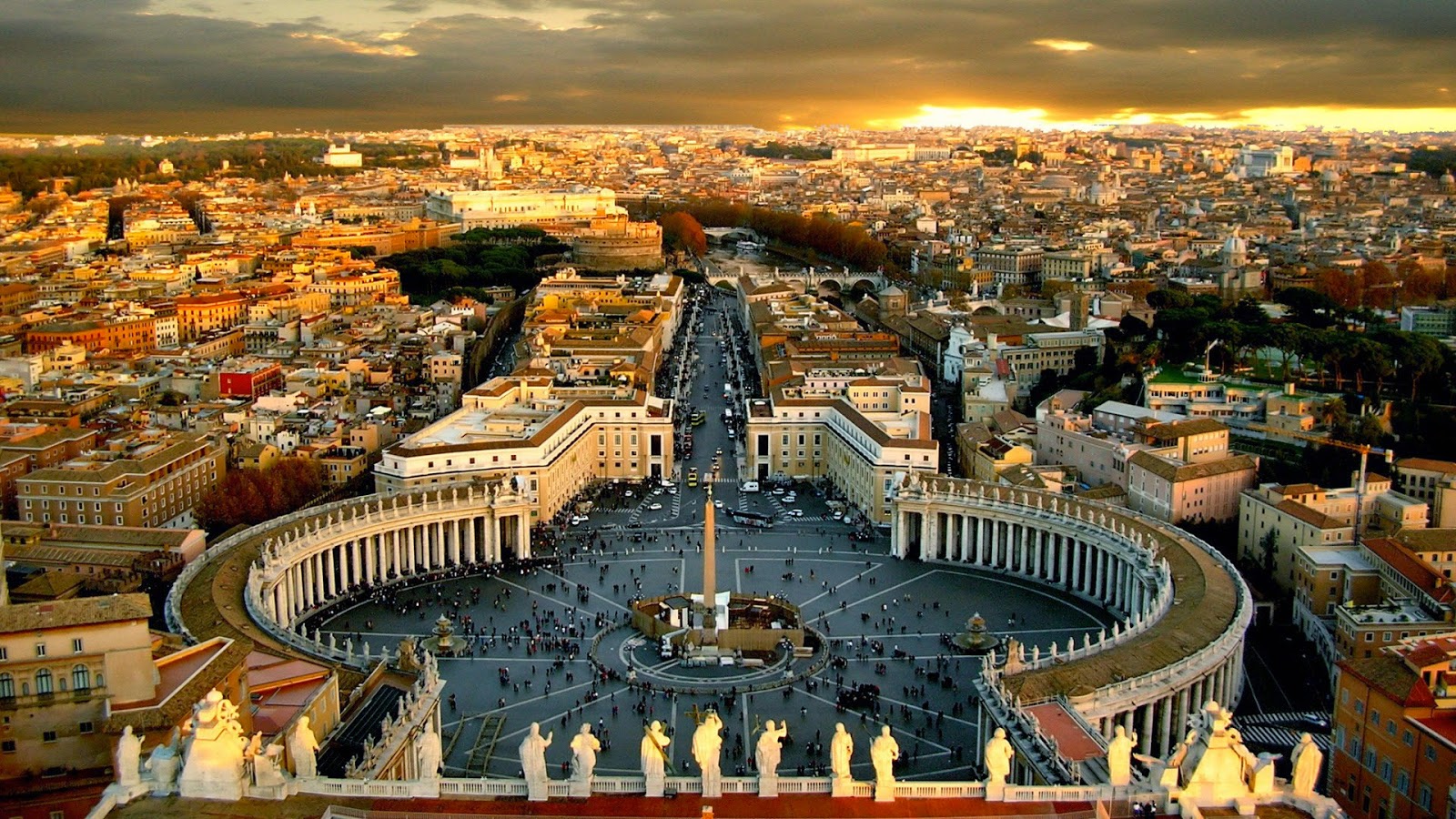 The Roamin' Correspondent of the IC, Regina Hiney, creates a timely and handy guide as a Christmas gift to Vatican-bound travelers.

In light of recent unfortunate events of a topless feminist stealing the baby Jesus from the Vatican City Crèche this Christmas tide, I have done a bit of research and lo and behold, Vatican City (given its small population) actually holds the record for the highest crime rate in the world.  Now, not everyone gets exiled.  But enough folks have gotten banished, that it is abundantly evident that a Handy Dandy Hiney guide is sorely needed.

1.    Let us begin with the most recent faux pas.  If you are visiting Vatican City and you want to see the official Vatican City Nativity Scene, please remember to keep your shirt on and try not to take the baby Jesus as a souvenir.   This is considered very bad form and you will be exiled.  Having said that, let us take a exiled look through history:

2.   Don’t be an idiot Visigoth.  Idiot Visigoths may ransack Rome but Saint Jerome or someone of his grandeur will take time out of their day to excoriate you with their words.  Jerome defended his dear friend, 85 year old Saint Marcella who was murdered by the idiot Visigoths.   Who won?  Well, all parties are dead . . . But there are no more idiot Visigoths, 1.2 Billion Christians (and not a few idiots in their own right) and 2000 years later we still have both the Latin Vulgate of Doctor Saint Jerome and know of the heroic virtue of Saint Marcella.  Idiot Saints beat Idiot Pagans every day of the week and twice on Sundays.  If you want to remain in Vatican City, don’t ransack Rome and tick off our doctor-saints.

3.   Don’t be possessed by a demon.  Pope Francis exorcises the Vatican frequently.  The Saint Michael prayer is said daily.  Don’t want an exile?  Reject Satan.  And all his works.  And all his empty promises.  If a legion sneaks in, chances are, the exorcists will find you and they will expel you.  Don’t mess with the diabolical.  Seriously.  Even if you don’t plan on going to Italy.  Throw away the Ouija board.
4.   Don’t be Pope during the reign of a jerky anti-pope.  An antipope is a person claiming to be Pope who was not duly elected or proclaimed while a duly elected Pope was still in office.  Now there have been quite a few antipopes in the 2,000 year history of the Catholic Church. Currently, there is a dude named Michael, living in Kansas with his mom, who claims to be the legitimate pope.  Pope Michael of Kansas is not the legitimate Pope.  Pope Michael might be legitimately crazy.  But he is mostly harmless, albeit schismatic.  Now, here is the very salient point, neither Pope Michael, nor his mom can exile Pope Francis.  This is NOT to say however, that there have been times when powerful crazy schismatics (and their moms) have not been so harmless.  If you don’t want to get banished from the Vatican, you want to avoid being pope when power crazy schismatics (and their moms) try to seize the chair.  Saint Silverius and Pope Vigilius (and Emperor Theodora) learned this the hard way.  So did Sultan Boabdil of Granada and his mother Aixa of the Nasrid Dynasty.

5.   If you ever find yourself writing the greatest piece of Italian poetry of all time, don’t place the reigning pope in the “Inferno” portion of your “Divine Comedy.”  Placing the reigning pope head first in a flaming baptismal font whilst his feet are being licked with scorching flames of burning embers is also considered bad form.  Folks have written things they regret.  Be it the politics of the Black and White Guelfs of Dante’s day or racial issues of modern America, don’t get sucked in.  And once a person gets defriended or exiled, they can’t take it back.  Dante wrote the greatest poem of Western Civilization.  He died banished and he may very well still be in his own Purgatorio.

7.   Incidentally, the Baby Jesus stealing friendly feminist was actually NOT the first woman interred in the Vatican jail and then banished from Vatican City.  Interestingly, when the little Vatican jail (whose one cell overlooks the Vatican gardens) opened in 1929, the first inmate was a Swedish woman who assaulted a member of the clergy.  She was given psychiatric tests and sent back to Sweden.   The best way to enjoy the Vatican gardens is by WALKING through them via a guided tour, or from the top of Saint Peters.  But if you have an axe to grind and are on a limited budget, the jail does offer a nice few, for a low price, for a limited time.  But chances are, it will be a once in a life time opportunity.

8.   Don’t steal alms from the poor.  After WWII, an Italian man broke into a alms box in Saint Peter’s.  He was held in the Vatican jail.  He was not allowed to return to Vatican City.

9.   Avoid assassinating popes.  Sure, this may SEEM obvious.  But not for the reasons you may think. 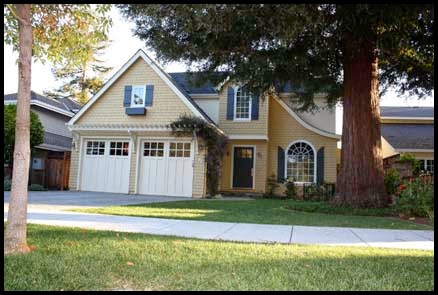 So, ten years ago our family moved into a nice neighborhood in suburban Virginia. It had some bedrooms, some bathrooms, a basement, a two car garage and a decent yard with woods and grasslands for our six children to view as they walk past the windows on their way to the messy basement to play the X-box. It is a small piece of the American dream paid for with the blood and sweat and tears of a middle management government career and the lucrative pay of a Catholic school teacher with a humanities degree. We signed a 30 year fixed rate mortgage and a home owners association contract. We joined the neighborhood watch and we had our house blessed. Its what Catholics do. Well, maybe not the neighborhood watch, unless you feel guilty about all the HOA letters your family gets. But the house blessing. . .that's what we do. We do it because we remember the joyful event of moving into a house, to thank God from whom all blessings come, we pray for protection, we pray for sanctification and we expel demons. If we are in the south, in a planned subdivision with well kept lawns and six children, we also freak out the Southern Baptist, but that is never our intention. But recently, after a few encounters with the local fauna and a particularly bad infestation of mice and then (because of the mice) a soiree of snakes, I had an epiphany. I thought that maybe, just maybe. ..what if my house blessing "didn't take." I wrote to the priest who did the house blessing;


"Dear Father,Ten years ago, you blessed our house. In that time our home has been blessed with one bear, a family of skunks, countless deer, a cache of snakes, raccoons and enough mice to fund labs all over the world to cure Ebola. This year, the mice have been a thing. Today I called a dishwasher repairman who pulled a dead mouse from the grinder inside the motor. After much prayer, I have come to the unfortunate conclusion, that my encounters with little woodland creatures are squarely because I did not obtain the house blessing of a Franciscan. Thought you should know. In Christ,Regina Hiney"

--Regina Hiney, Roaming Correspondent
Posted by The Ironic Catholic at 8:00 AM 2 comments:

Fake news, light satire, a few books, bad theo-geek kitsch to buy and jokes. Think The Onion written by someone who loves the Catholic Church.

Proof The Catholic Blogosphere Has Lost Its Standards in 2011 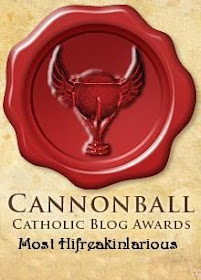 (Other undeserved awards below)

Ironic? Informational? Literary?: You Figure It Out

The last shall be first

Patron Saint of this blog 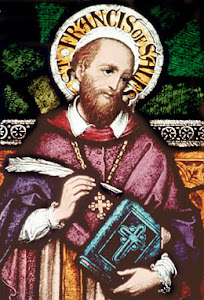 All the Catholic humor you never thought possible! Or even desired!